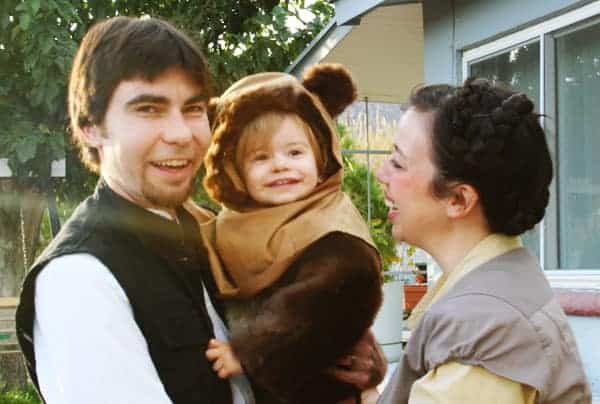 After I pulled an all-nighter sewing up this adorable Ewok costume, my sweet toddler decided he wanted nothing to do with it. Seriously, we were able to take these pictures in the five minutes he actually wore the costume and were only able to get him to laugh by using every trick in the book:

“Jack, you want candy? Ooo, look at the BIG candy. I’m tickling your toes. Mama’s going to eat your toes! Look at the airplane…and the train…and the ball…and cars…”

In the end, the only thing that worked was having Jim pretend to drop him. Over and over. That look of joy on Jack’s face is from the hilarity of almost being dropped on your head. Crazy toddler. 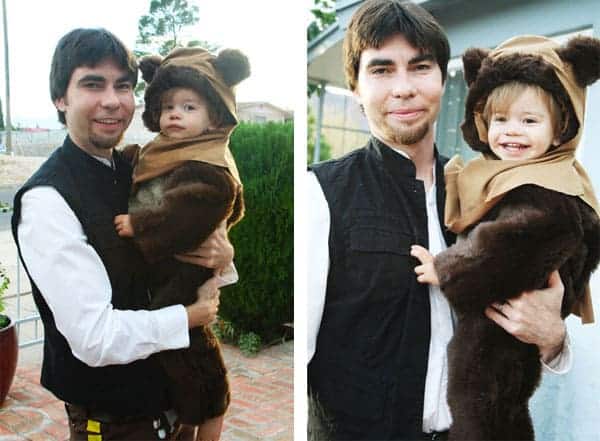 But enough with the complaining already, let’s get on to the crafty talk.

It’s crazy to think but this costume has been in the works for the last six years (ever since I saw this post on Wee Wonderfuls). We would have done this sooner except we didn’t have one tiny but essential element to the Wicket costume…a kid. Well, we obviously got to working on that and here we are six years later, writing almost the identical post as on Wee Wonderfuls (who’s little kid wasn’t digging their Ewok costume either).

For Jackson’s costume, I pretty much just followed the Simplicity #2506 pattern for a teddy bear. Instead of the suggested fabrics, I used crazy thick fake fur (which may have been my downfall right from the beginning) and omitted the hand/foot cuffs. I also made the ears slightly smaller but looking back on the pictures, I probably could have taken them in even more. The head is essentially the same (I didn’t do the velcro closures because I couldn’t flip the crazy thick fur inside out). The leather hood thing I just kinda winged. All in all, very happy with the way it turned out!

And yes, Jim and I are in costume as well. We went as Han Solo and Princess Leia, of course, wearing their Endor rebel outfits. What can I say? A family that nerds together, stays together.