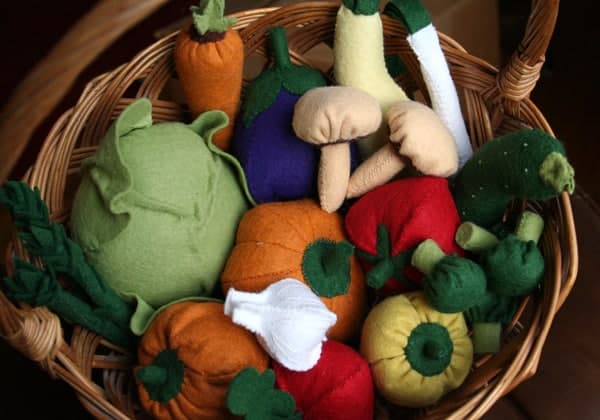 You know how accomplished you feel after completing a project you’ve had on the back burner for years? Felt food is “that project” for me. Ever since I started noticing felt food on the internet a few year ago, I knew I was going to make them for my children. There are so many things in this world I won’t be able to give my children (elephant, anything knit, good eyesight) but sewn gifts? I got that covered! So, until Jackson becomes annoyingly mature enough to ask me for anything else, I’ll be blissfully sewing him felt food and other little goodies.

I went with Ume Crafts for the pattern and I was pretty much satisfied with both the directions and the final results. The only change I made in some of the patterns was to enlarge them just a bit. The yellow bell pepper was the first veggie I completed and it was just a tad too small for my taste so for some of the rest, I added .25″ to the pattern edge. Worked fairly well until I came to the eggplant. For some reason, my eggplant came out looking more like a purple pear than anything. Oh well, I’ll just tell him it’s from the farmer’s market. 😀 In the end, I would have no problem recommending the pattern. The number of different veggies you get for under $15 is quite the deal!